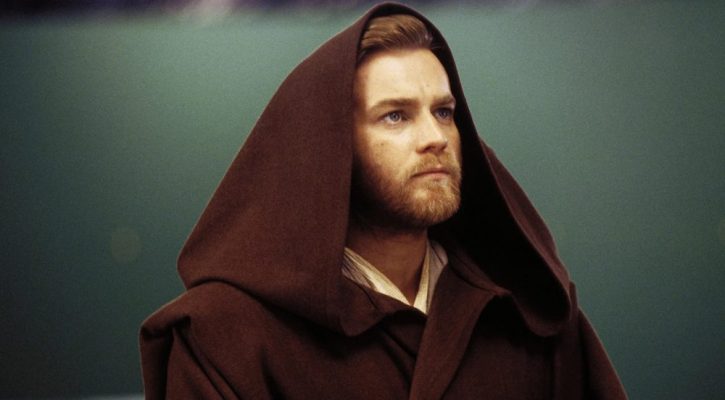 Great news, everyone! Ewan will be returning as Obi-Wan Kenobi for a Disney+ series. Report via Deadline:

Ewan McGregor may be picking up his lightsaber again. The 48-year-old Scottish actor is in talks about reprising his role as the heartfelt but headstrong Jedi master known as Obi-Wan Kenobi in a yet-to-be-titled Disney+ series, Deadline has confirmed.

Details about the series following the Jedi master are being kept under wraps. McGregor played the younger version of the wise but irascible Star Wars icon in the three prequel films: The Phantom Menace (1999), Attack of the Clones (2002) and Revenge of the Sith (2005). McGregor also revisited the role to make a voice-only cameo in the Star Wars: The Force Awakens (2015).

Plans to produce a stand-alone Kenobi feature film morphed into the current plan for a big-budget series for Disney+, just as the discussion of a Boba Fett film gave way to the similarly spirited The Mandalorian series.

It may sound like a demotion in status and priority (and a reaction to the disappointing returns on the Han Solo film) but Disney+ is a small-screen venture of colossal importance to Disney. The digital subscription service has become an all-hands-on-deck mission for Disney with a bevy of shows from Marvel Studios and major-budget original programming, such as the high-profile remake of The Lady and The Tramp.

Disney+ plans are expected to be a core component of the on-stage preview presentations at Disney’s D23 Expo later this month in Anaheim. That programming will likely include the introduction of McGregor as a returning screen star in the Jedi universe.

Alec Guinness introduced the role of Ben “Obi-Wan” Kenobi in 1977 in Star Wars, the original installment in George Lucas’ space opera, which was later renamed Star Wars: A New Hope. Kenobi was struck down in that first film during a heart-wrenching light saber confrontation with Darth Vader aboard the huge space station called the Death Star, but the old Jedi wizard returned as a disembodied voice or spectral vision in the film’s two mega-successful sequels, The Empire Strikes Back (1980) and Return of the Jedi (1983).

Guinness died in 2000 after a storied acting career that included roles in The Bridge on the River Kwai, Dr. Zhivago, Kind Hearts and Coronets, as well as Lawrence of Arabia, the David Lean-directed epic that both Lucas and Steven Spielberg have described as a North Star influence on their own bodies of work. By casting Guinness, Lucas wisely imported the gravitas of that epic career into his Jedi universe but the actor himself was famously unimpressed with the filmmaker’s interstellar saga, which the British stage veteran dismissed as “fairy tale rubbish.”

McGregor inherited the beloved role with all the major pressure and smothering legacy that goes with any generational shift in the fantasy saga, which long ago transcended the status of blockbuster brand to become a quasi-religion (and pathological retail obsession) for millions of fans. But McGregor delivered in a big way, adding dimension and depth to his character even when the wonky dialogue did him no favors on either front.

McGregor had made a name for himself already with memorable turns in compelling indie fare like Trainspotting, Brassed Off, and Shallow Grave, but the 1999 global relaunch of Star Wars took him to a new strata in his screen career. Without his Jedi robes, he also added notable successes with films such as Moulin Rouge, Black Hawk Down, Angels & Demons, The Ghost Writer, Beginners, and Christopher Robin.

This year McGregor will be seen in the nefarious role of Black Mask in the Birds of Prey film and in horror sequel Doctor Sleep, in which he portrays Danny Torrance, the grown-up survivor of the Overlook Hotel massacre depicted in The Shining.

All Star Wars films will be available on the Disney+ platform. The new Star Wars with McGregor series would join the previously announced The Mandalorian from Jon Favreau and starring Pedro Pascal. That series takes place years after the events of Return of the Jedi and follows a lone Mandalorian gunfighter on the volatile rim planets beyond the reaches of law and order. The bounty hunter series will debut on Nov. 12, the Disney+ launch date.

Disney+ will also have a Star Wars spinoff series starring Diego Luna and Alan Tudyk reprising their Rogue One characters Cassian Andor and K-2S0. Stephen Schiff will serve as showrunner.