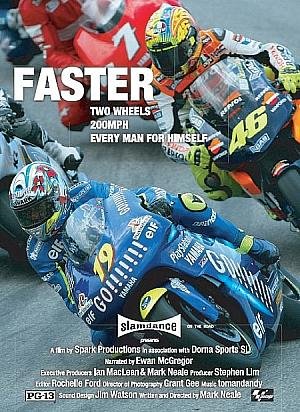 The first film to go inside the MotoGP world since television took a sport watched by a few thousand spectators at race tracks and turned it into prime-time entertainment for over 350 million people worldwide. The MotoGP world championship is the pinnacle of motorcycle sport, a series of sixteen races on five continents contested by twenty-four of the world's top riders. Filmed around the world during the 2001 and 2002 seasons, FASTER asks this question: How do you go faster than the rest, how do you win at this glamorous, dangerous game? The movie could be subtitled: How do you beat Valentino Rossi? The 24 year old Italian, world champion in 2001 and 2002, currently dominates MotoGP, and he's the charismatic center of the film. In addition, FASTER focuses on three other riders: Rossi's bitter rival Max Biaggi; the brilliant but injury-prone Garry McCoy; and the rising teenage star John Hopkins. Tales told by a supporting cast include former world champions including Mick Doohan, Kevin Schwantz, Wayne Rainey, Kenny Roberts and Barry Sheene.